Definition [Merriam-Webster]: Different from the usual or conventional:

When we define something as being ‘alternative’, there is an implicit assumption that it is not the first choice. It becomes the exception, used only when ‘normal’ isn’t working. In the criminal justice system, for decades, prisons have been seen as the primary form of punishment, with non-custodial measures being referred to as ‘alternatives to imprisonment’. And therein lies the first problem. Prison is still considered the main vehicle for delivering justice, despite mounting evidence suggesting that prisons increase inequality, and add to the vulnerability of already disadvantaged groups (read: women and minorities).

Research clearly shows that many women in prison have experienced multiple forms of victimization and abuse, as well as lives marred with poverty and inequality prior to their criminalization. Prison, for such women, can be re-traumatizing experiences that further victimize and harm them. In addition to that, without individualized treatment programmes and trauma-informed care, the prison experience can be a barrier to women’s successful reintegration after release. Yet, the number of women in prison continues to increase. Since 2000, the percentage of women and girls in prison has increased by 53%, compared to the 20% rise in the male prison population. This is a worrisome trend, with the ability to profoundly impact the lives of millions of women and children.

This is exactly what we’re witnessing as a result of the COVID-19 pandemic. Pre-existing problems in the criminal justice system have been clearly exposed, highlighting major gaps in the way we sentence and treat women in conflict with the law. As countries have rushed to release vulnerable groups of prisoners including women, it has become glaringly obvious that this system is failing the women who pass through it. It needs a complete overhaul, starting from the point of arrest, to their trial, imprisonment and release. Policies and practices need to be re-written to include gender considerations.

Dr. Barbara Owen, TIJ Advisor, argues that instead of investing in the prison system that has failed us repeatedly, it is time to shift investment into non-custodial measures for women offenders. Investing in non-custodial measures is equivalent to investing in women and the community, and this, she says, can lead to internal and external positive outcomes. By re-directing investment from prisons, community-based sanctions tackle the external needs of women like housing, education and childcare, as well internal change through treatment and therapy. This is likely to encourage pro-social behaviour in the long run. This sentiment is echoed by  Ms. Tamar Chanturia, Projects Assistant, Penal Reform International, who pointed out that by increasing investment in alternatives to imprisonment, it helps women make positive changes without facing the alienating and de-socializing effects of imprisonment.

However, this cannot be accomplished without investment from the court, as it plays a central role in determining the criminalization of women at an early stage. When courts fail to have gender-responsive investigative procedures and sentencing guidelines, the decisions made can result in unnecessary punitive outcomes for women. Mr. Nicolás Laino, Deputy Public Defender General of the Public Defender’s Office of Argentina and Board Member of the International Legal Foundation, elaborated on this with an example from Argentina, where the Public Defender’s Office has mandatory trainings as well as a Commission on Gender Issues, staffed with lawyers specialized in women’s rights. This has resulted in an increase in the use of non-custodial sentencing and has helped obtain acquittals, case dismissals or penalty reductions.

Thailand’s ‘Program for the Increased Protection of Rights and Liberty of the Accused and Defendants 2019’ aims to achieve similar outcomes, by educating judges on the proper application of alternatives to imprisonment, to minimize unnecessary pre-trial and pre-sentencing detention, and to increase the use of non-custodial measures for vulnerable groups, including women. According to Dr. Sutatip Yuthayotin, Judge of the Office of the President of the Supreme Court, this programme – which is being rolled out in three phases nationwide – is already yielding promising results. 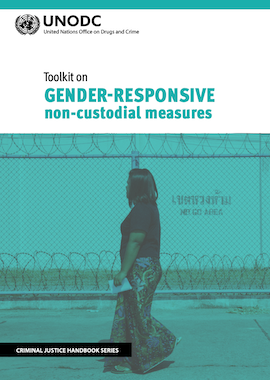 While the court is a key player, it is important to remember that reforming the criminal justice system will require collaboration from multiple stakeholders in and outside the system. To assist in this effort, the Thailand Institute of Justice (TIJ) and the United Nations Office on Drugs and Crime (UNODC) recently published the ‘Toolkit of Gender-Responsive Non-Custodial Measures’. It’s offers practical guidance, as well as self-assessment and training exercises on ways to implement non-custodial measures for women in general, as well as those from special categories, including foreign nationals, those arrested for drug offences and survivors of domestic violence.

The launch of this Toolkit coincides with the 10th anniversary of the historic United Nations Rules for the Treatment of Women Prisoners and Non-custodial Measures for Women Offenders (the Bangkok Rules), which for the first time officially recognized the distinct needs of women offenders. As we look back and celebrate the progress made in these 10 years, it is also a much-needed reminder that we still have a long way to go. It is time to re-evaluate how we define ‘punishment’, and shift away from a punitive regime to a community-based, rehabilitative one. It’s the only way to move towards a fairer justice system; one which puts women at the centre, instead of it being an afterthought. Only then can we create a society where prison is considered an ‘alternative’ for women offenders.

The Heroic Face of Justice 17 Sep 2020
8th Anniversary of the Bangkok Rules: From Imprisonment to Community Reintegration; Bringing Offenders Back to Society and Leaving Nobody Behind