ARTICLES Restorative justice is the way forward to strengthen the efficiency of the Thai justice system, and ...

Restorative justice is the way forward to strengthen the efficiency of the Thai justice system, and worldwide

We are all acquainted with the criminal justice system that puts people behind bars and relies on imprisonment and detention to operate. But if we consider taking a step back to look at the mechanisms of the existing justice system – we may want to ask, “Do we have other options?”

A significant problem of the justice system is prison overcrowding. As of today, Thailand has a prison population of nearly 400,000 people, which is partly due to the conception that all offenders should be put behind bars. This is not always the solution. When a crime occurs, the repercussions could fall not only on the victim, but sometimes the families and others parties involved. The resulting harm is not always only physical, but can extend to emotional and psychological trauma as well, particularly in cases involving sensitive crimes.

Restorative justice steps in to fill the gaps in traditional criminal justice processes. Its participatory nature encourages the collaboration between victims and the offender in rehabilitating the harm caused, along with the help of a facilitator. This results in a victim-centered approach that redresses the suffering of the victims while supporting the reintegration of both victims and offenders.

What is new about the Handbook and why was there a need for this revised version? 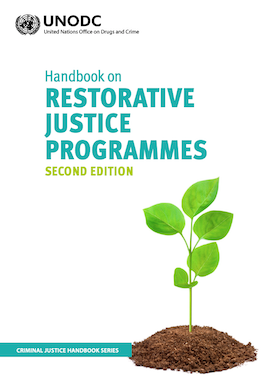 Restorative justice is a victim-centered justice approach. It understands that in many cases, imprisonment does not undo the harm done to the victim and indirect victims such as families and communities. Restorative justice aims to ‘heal’ and rehabilitate rather than ‘avenge.’ However, the restorative justice process can be complicated, for instance, in serious offenses such as sexual violence. We may not have sufficient examples to learn from and be left with many questions: how to implement restorative justice approach in such cases? How to heal victims and all related parties, and also repair the roots of the problem? The Handbook on Restorative Justice (Second Edition) provides answers and recommendations to this. Anyone who picks up the Handbook will understand the approach better and learn from up-to-date practices that can help put the knowledge into action.

Apart from the fact that restorative justice fills in the gaps of the traditional justice system which fails to heal victims, it also makes the justice system more sustainable. Even though governments must first invest financial resources to transform the justice system, in the long-run, restorative justice builds an environment conducive for victims to heal and for perpetrators to reintegrate, all at a lower cost. This may present solutions to prison overcrowding and less budget spent on justice processes. For instance, prisons generally have a high operating cost that includes electricity, running water, food, to name but a few, but if restorative justice gains its ground and can be implemented on a wider scale , this may relieve prisons and the overall criminal justice system of a significant portion of its expenditures.

The updated Handbook does not only provide definitions, theories, and implementation techniques for restorative justice; but it is also insightful in presenting a framework on how to make restorative justice sustainable, and on how to incorporate it into the national agenda. This includes strategic public communication about the meaning and values that restorative justice can provide to build better understanding with the public to gain their support..

Restorative justice is the stepping stone of the justice system. If it comes into action, it has the unimaginable potential to transform the criminal justice system. Support from every sector, judges, lawyers, public prosecutors, civil society and the public, is of utmost importance. This Handbook is like a seed, in a small space it packs lots of knowledge and possibilities but for it to grow, the knowledge and experiences in the book need to be used and adapted by governments, policymakers, criminal justice practitioners , and everyone committed to change.